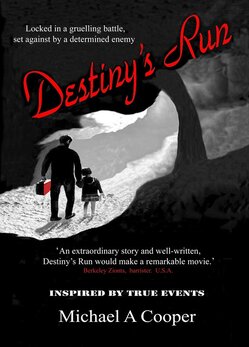 To purchase a copy of Destiny's Run - see order form below

Although inspired by true events, Destiny’s Run is written as a work of fiction.

Michael A Cooper tells his story of a father and child who are forced to live a life as fugitives. Written as a realistic narrative, Michael’s powerful story is as inspirational as it is devastating.

For his young daughter Maddie to survive a hostile environment of impending incest and alcohol-fueled violence, Michael must take desperate measures and remove her from this danger.

Michael finds himself in the dreadful situation of having to go against the mother, who has taken the incomprehensible step of placing their young daughter into the same incestuous situation, she herself had grown up in. The mother and her boyfriend, with the full support of The Family Court, has been given full power over our child's life.

Michael can no longer deal with the deaf-eared Family Court. He is forced into the position of making a tough, but obvious decision - a decision that will see Michael and Maddie become outcasts from society - fleeing from the law.

Little did Michael know that he and his daughter would be pursued so vigorously, by an immovable justice system and a headline grabbing media.

Ultimately the government brings down the order, Michael and Maddie are now priority one - get them at all cost.

Destiny's Run tugs on the emotions, inspires the heart and educates the reader to the workings of an overpowering system that greatly influences our family structure.

Rich in incident and haunting images, juxtaposed with warmth and humour, Destiny's Run is fast moving and compelling, a story that is truly inspirational.